In this Real Life Use Case, learn how an enterprise-class Contact Center with six disparate geographic locations was able to transform large waves of inbound service calls into business as usual. By working with the experts at Swampfox and implementing the industry’s most feature-rich solutions for intelligent call handing, intelligent greeting, digital empowerment and callback, this enterprise Contact Center was able to: 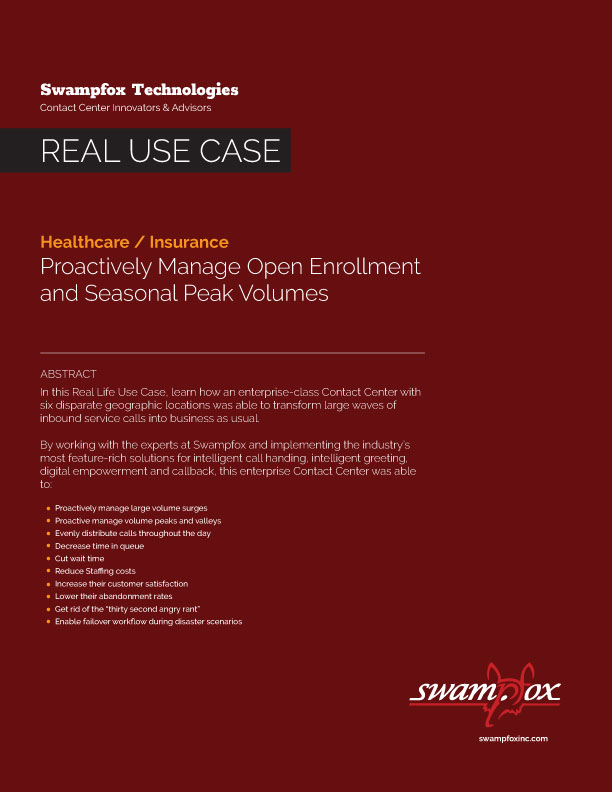 Through the implementation of Callback (First In Line), the client was able to increase their time saved in queue by offering their callers the opportunity to receive a scheduled or ASAP callback instead of waiting on hold.

During peak enrollment times, 4,000 to 8,000 calls per day utilize FIL. This has increased their customer satisfaction, lowered their abandonment rates and lowered because the initial “thirty second angry rant” from callers that have been waiting on hold for long periods of time.

Furthermore, on normal business days, when open enrollment is not in effect, the client still has two major peaks in the day in which 2,000-3,000 calls per day go through Callback.

With Callback, the managers were able to adjust the number of slots and times offered for schedule callbacks to more evenly distribute their calls throughout the day. This cut down the wait times at their peak times by enabling callers to schedule a callback for periods with less demand. They were able to reduce staffing costs by more evenly distributing their call load during the day.

Interestingly enough, Callback has also worked as a failover when the client had a major telephony outage making it so that their agents were not able to login to accept calls. During this period, Callback was still queuing up calls, which was a graceful way of not letting their customers know that they were sitting in a dead queue. Since EWT skyrocketed during this period, customers were able to request a callback that then went out as soon as they were able to get their agents back online.